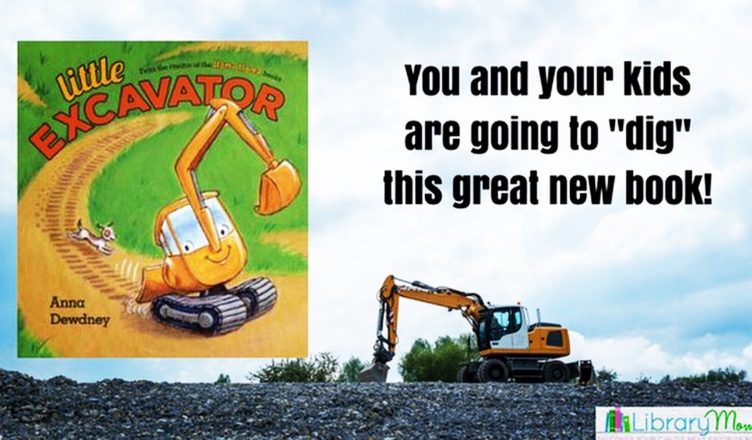 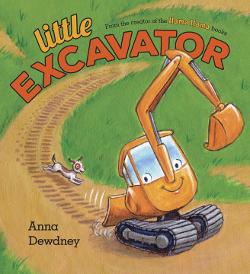 Little Excavator is ready for his first day on the construction site where he is helping the big rigs turn a vacant lot into a beautiful park. Despite his enthusiasm, however, Little Excavator is too small for almost every job. He tries his best, but topples over often. When the vehicles need to cross a narrow bridge to put the finishing touches on the park, it is finally Little Excavator’s turn to shine.

Small children will most likely see themselves in Little Excavator who wants so badly to help the bigger vehicles, but is often told to “watch out” and “not yet…someday when you’re big.” If they are like my two-year-old and four-year-old, they will giggle at the physical comedy of Little Excavator falling over and smile at the encouraging last lines, “You may be small, Little E, but you will grow … You’re a Mighty Little Excavator… Go Go Go!”

The rhyming text blended with construction-themed onomatopoeia, and large, cheerful illustrations make this a perfect book for sharing at storytime with a group or for cozy one-on-one readings. Anna Dewdney is well known for her Llama Llama series and has now graced us with this gem before her untimely death last year. We will miss her wonderful books, but are so grateful to have this last one.

New books alert!!! I am beyond excited for these n

Growing up in Florida, I never truly understood th

I am heartbroken by the news of Ruth Bader Ginsber

Every now and then a book comes along that stops y

HARLEM GROWN is the inspirational true story of ho

One of my biggest struggles as a school librarian

It’s starting to feel like fall and that means H

Our Giveaway is CLOSED. The randomly selected winn

OUR FAVORITE DAY OF THE YEAR features an incredibl

We are swinging into the long weekend with this hi

Madeline Finn is one of those special literary cha

It’s been quite awhile since our last big librar